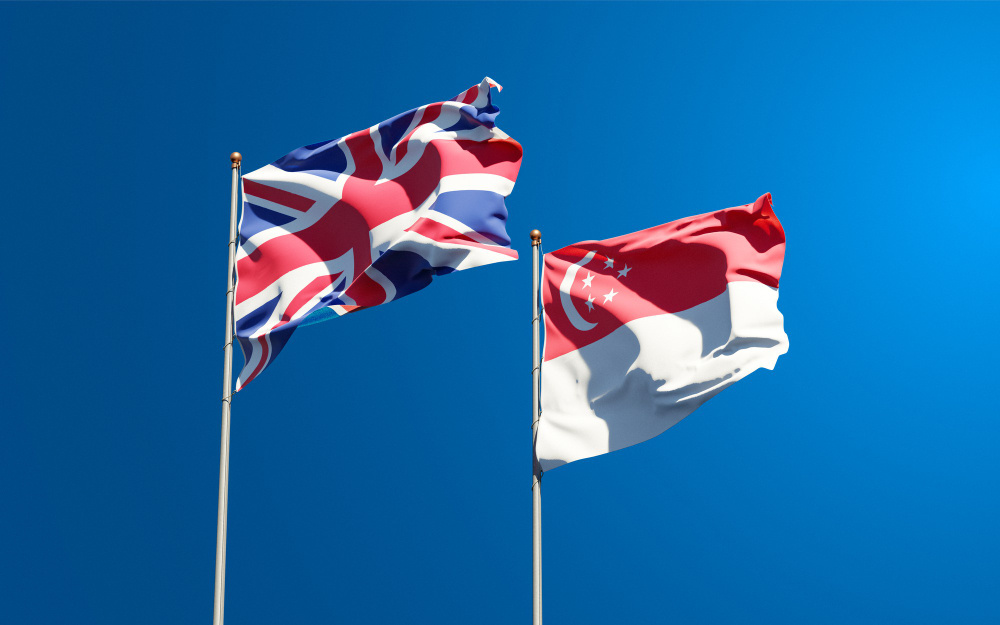 What’s in the article?

In this article, we’ll compare the ease of doing business in Singapore, versus the United Kingdom. We’ll be comparing business practices and processes between the two countries, as well as factors that determine the ease of incorporation in each country.

Singapore holds a DB score of 86.2, making it the second easiest country to set up a business  in the World Bank’s report on the Ease of Doing Business, which studies different factors in each country to determine how easy or difficult it is to operate a business in the country. The United Kingdom ranks at 8th, with a DB score of 83.5.

The DB score is based on a number of factors that affect the ease of doing business in a country, with categories like Starting a Business and Dealing with Construction Permits as some of the factors affecting business set up in each country. Countries are ranked in these categories, with 1 being the highest number a country can achieve, topping the rest in that category.

Singapore's Accounting and Corporate Regulatory Authority (ACRA) makes it simple for business owners to establish businesses in the country, and the country welcomes foreign trade and investment with tax benefits, streamlined incorporation processes, and other incentives.

The Ministry of Trade and Industry (MTI) expects Singapore’s GDP to grow between 3% to 4% in 2022.

Similarly, the GDP of the United Kingdom is expected to rise by 3.6% in 2022, and its economy is notably independent and developed. Its international trade represents 55.5% of the country’s GDP, with the Department for International Trade overseeing foreign investment in the country.

Singapore operates with a fast-paced, and highly-globalised economy with over 37,000 foreign companies operating in Singapore. The country is one of the leading locations for innovation, technological advancements, and digitisation, which makes the country an attractive business environment for multiple industries and fields.

The United Kingdom, on the other hand, is a market-oriented economy with a focus on developing their social market. The UK is known for being one of the safest and easiest places to do business, and this is due to its business-friendly environment, and robust economy. Companies look to the UK for business expansion, investments, and trade.

Singapore is a country with the majority of its population under the age of 35, which makes for a relatively young workforce compared to the United Kingdom, which has a median population age range of 40.5. While Singapore is greatly white-collared, with much of the population working in professional jobs, professional workers account for only 25.7% of the workforce in the UK. The United Kingdom is also experiencing a shortage of workers for blue-collar jobs as younger workers are aiming for managerial positions.

ACRA oversees business registration and incorporation in Singapore, and foreign entrepreneurs can register their businesses through BizFile+, which lays out the step by step processes in incorporating a business. WealthBridge may ease the process of incorporation through our corporate services that help with assistance to register foreign businesses in Singapore.

Incorporation in the United Kingdom can be done digitally, or via paper. Interested parties must secure and fill out form IN01, and submit the required documents of incorporation to the

Registrar of Companies for England and Wales. There are multiple requirements to incorporate in the UK, with plenty of documents to file in order to set up a company.

All requirements can be found under BizFile+ for Singapore, and the required documents differ per type of business. In the United Kingdom, the UK government has detailed the process of incorporation, as well as the requirements in their website.

Singapore offers multiple types of visas for immigrants or workers entering the country from the EntrePass for foreign entrepreneurs, to an Employment Pass for managers and workers. The UK offers similar visas, spread across multiple categories like Senior or Specialist Worker Visa, Health and Care Worker Visa, and Long-term Work Visas.

One of the reasons why foreign entrepreneurs choose to incorporate in Singapore is due to their competitive flat tax rate of 17%, which is much lower than its neighbouring countries' tax rates. The UK has planned to increase their corporate tax rate from 19% to 25%, but has since cancelled the plan to do so. It is unclear whether the UK will continue the increase in the future.

Singapore holds the title for having one of the most efficient and functional bureaucracies in the world, making it easy for people to conduct business, and gain permits and processes swiftly. The United Kingdom bureaucracy operates with His Majesty's Civil Service, who administrates majority of the government procedures in the country.

Singapore is a business-friendly country, being open to foreign trade and investment with multiple incentives, regulations, and benefits to operating a business in the country. Simply put, Singapore makes it easy for foreigners to set up businesses in the country for their economic growth and diversification.

The United Kingdom has limited its openness to trade following their controversial separation from the European Union (EU), dubbed Brexit. The move had come in full effect as of January 2020, and has since decreased the country’s openness to trade. Separating from the EU has also negatively affected the nation’s productivity, foreign trade, and competitiveness as well.

Singapore is crowned the most globally competitive market in the world, according to the Global Competitiveness Index report of the World Economic Forum. Singapore’s open economy, well-educated workforce, and innovation-encouraging environment contributes to the country’s top spot as a competitive market.

Despite separating from the European Union in 2020, the UK remains the largest market in Europe. However, its global competitiveness has declined following Brexit, ranking 9th in the Global Competitiveness Index - just below Sweden (8th), and Germany (7th).

Singapore is located at the heart of Southeast Asia (SEA), and many of the foreign companies operating in the country entered due to its strategic location in SEA, and in Asia overall. On the flipside, the UK was regarded as the trading hub in the EU, but following their separation from the organisation, foreign trade in the country has slowed down despite sharing land and maritime borders with 8 European countries.

Why Do Business in Singapore?

‍Check out our blog on why you should incorporate your company in Singapore here.